I have climbed for many years in the Dolomites region of northern Italy, utilising the 'Via Ferrata' - fixed iron cables that were originally set up to allow Austrian and Italian troops to fight at high altitude in World War I.

These sheer, mountainous routes are still littered with evidence of the military conflict, together with the suffering an implacable nature inflicted upon the unfortunate soldiers posted here. Many of them, from these remote self sufficient mountain valleys, had friends and relations fighting on the other side and loyalties were often torn. 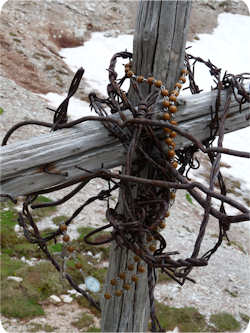 In this talk, I explore the impressive mountain landscape, the techniques for negotiating it, and also delve into the history of this little known harsh wartime frontline.


"Huge thanks for yet again giving us such a great talk. As I think you could judge for yourself everyone thoroughly enjoyed it and we had one of the “buzziest” evenings we have had for a while! I was so pleased to see so many people staying and chatting afterwards – we had to practically kick them out at the end! You had obviously put in many, many hours of work to put that talk together and it really paid off. I heard so many great comments, particularly on the photographs and you gave us many aspects of the Dolomites, geographical, geological, historical, tourism, mountaineering, walking etc.etc – something for everyone in a way."
Liz Turner, Friends of Ravenna, Chichester 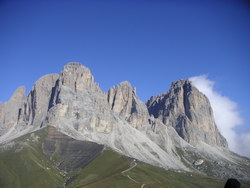